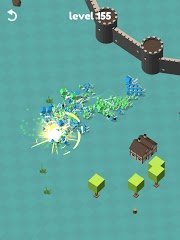 Army Clash - take an active part in an active battle that will take place between two militant factions. Throughout the gameplay you will have to do the construction of a large castle, which you will also have to defend against the enemy, while attacking its facilities. Throughout the gameplay you can collect a huge army, after which you will defend your own fortress, attacking the enemy. Soon you will be able to win this battle, and will pump their own soldiers. You will fight the enemies with the help of various weapons and ammunition, as well as do everything necessary to ensure that they do not capture your own territory.