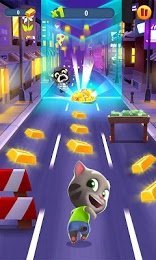 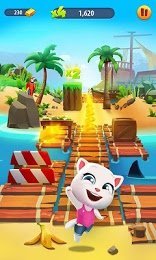 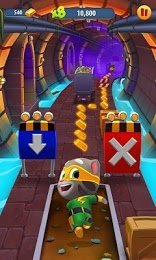 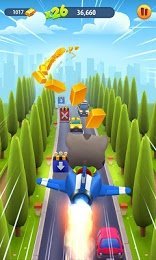 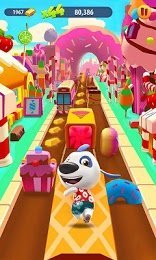 Talking Tom Gold Run is an increasingly popular game for Android devices developed by the studio that was already released the game Talking Tom 2. The gameplay of this action is similar to the well-known runner Subway Surfers. The scenario is quite simple: the main character called Tom is required to run a large continuous route collecting the gold coins.

The snag of a plot is in the fact that Tom will meet the obstacles and traps to overcome. After passing these obstacles, the main character will receive a lot of gold coins and beat the high score.

Sweet and charming game character able to win over a huge army of fans. Tom is popular among kids, students, and even clerks. The cat is not only collecting gold coins while running the map, but he also wants to right a wrong since criminals stole these gold coins. It would be difficult to catch them. The obstacles are getting bigger with every level and Tom had to find the way that is more creative than expected as well as to show a great reaction to defeat them all.

The other advantages of the Talking Tom Gold Run:


So, how to collect more gold? The key goal of the game is to collect gold coin but some of them could be hidden and it’s not simple to find it. The treasure could be allocated in the strangest places of location, so you have to explore every corner of the Talking Tom Gold Run game world. It is obvious to get some gold in reward for your hard work as well as the spiritual fulfillment and aesthetic enjoyment of the game.