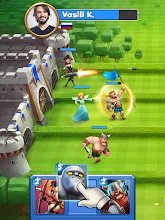 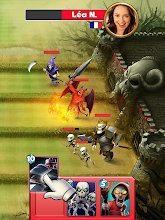 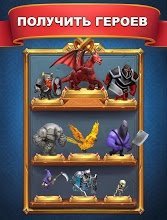 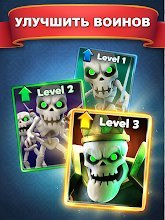 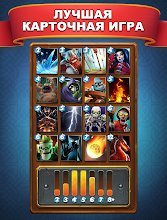 Castle Crush - mobile strategy has always enjoyed a considerable share of popularity, even if they are somewhat inferior to their computer games in terms of capabilities, but still sometimes these games are able to pleasantly surprise. Here in front of you just such a game, which turned out to be quite interesting.

Some special plot you will not see here, the game is multiplayer, so you have to fight with real opponents literally from around the world. At your service will be a solid set of soldiers, ranging from dryads and ending with dragons, which can destroy literally all life.

the Game turned out to be quite difficult, since you are fighting with real opponents, do not expect formulaic actions, any enemy player can bring you a lot of problems. The game initially need to think through their effective strategy, because one mistake can cost you victory. The game can be attributed to the genre of tower defense, your main goal is to destroy the enemy's buildings before he gets to you. The complexity of the game gives the fact that the enemies can attack simultaneously in several directions, so sending an army to destroy the enemy, do not forget to leave a solid detachment to guard your castle, otherwise it may well happen that the enemy will get to you at a time when you are already going to celebrate the victory. Agree all of the above is enough to Castle Crush: Epic Battle - Free Strategy Games. At the start you will receive, as a rule, weak players, that's just they can be repeatedly improved, as well as improve, in addition to the game you can replenish your army with more perfect fighters. Defeating opponents, you will also receive some bonuses, usually additional fighters for your army, or useful resources.

Graphic design is on top, all your fighters, as well as the army of opponents, however, looks pretty enough, so do not disappoint you with their appearance. In addition, it is quite convenient and functional management. But there are drawbacks, and the game has paid content, we can not say that much is tied to real money, but everything is so the player who will use the money, will receive an undeniable advantage over all other players, this can be attributed to the shortcomings of the game. After all, few people like the situation when the victory is won by a beginner who did not adjust any efforts, but simply paid. Since you have to play with real players, you initially need a fairly fast mobile Internet, without it to play fully, just do not work.