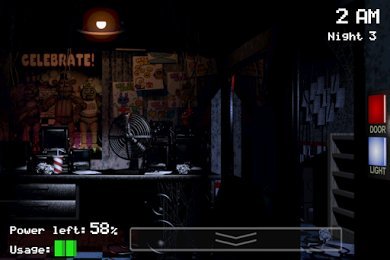 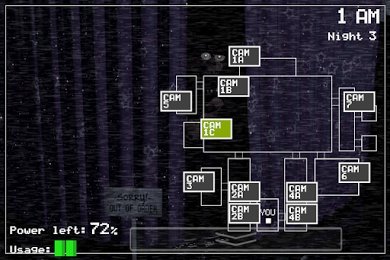 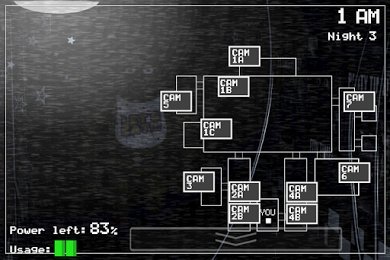 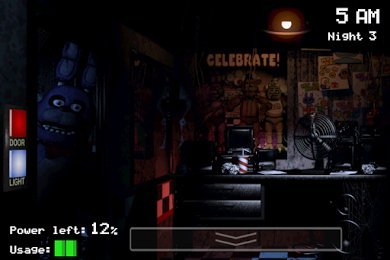 Five Nights at Freddy’s is a fresh and scary horror gaming application. This game is already get managed to scare a significant number of PC users and now this game is available for Android devices. In this game, you will be acting from the ordinary night guard at well-known pizzeria Freddy Fazbear's Pizza.

The toy animals are glad to bring joy children by daylight but when the night starts, they trying to escape the toy box and find the exit in order to kill you. You are locating at your office monitoring the situation inside the building using security cameras. Your goal will be to survive for five nights and to get a salary in case if you will stay alive.

Your key objective would be to monitor Freddy and his friends using security cameras. Certainly, by implementing ideas as to possible additional ways of achieving savings on the budget, you will be limited to use the cameras because of the unstable power supply. If you will use the overall charge of the battery needed for cameras supply in one night, you would be in the hands of Freddy.

You are also available to lock the security doors to protect against enemies but it requires a lot of power supply charge. You can replace the security cameras when it will be necessary for the same way. As for the control system of the Five Nights at Freddy's, that is quite understandable.
As for the gameplay, each animatronic character has clear patterns of paths. The vast majority of the enemy’s movements occur when the main character is turning off the security cameras.

What also you should know about the Five Nights at Freddy’s: