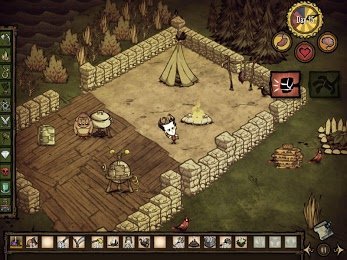 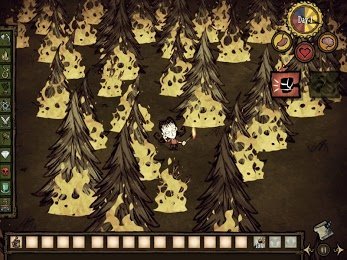 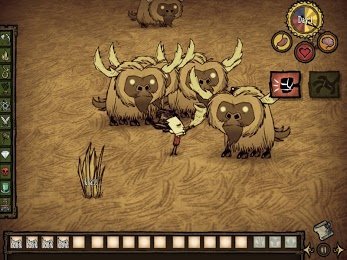 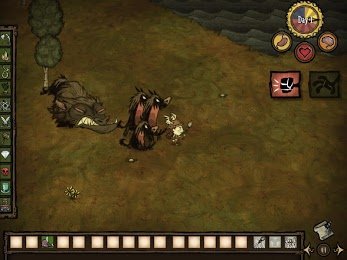 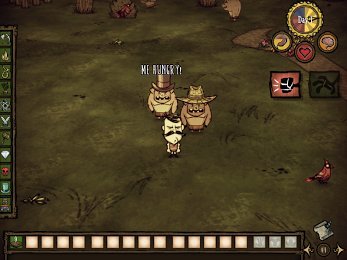 Don't Starve: Pocket Edition - this application is а survival simulator that, due to well-developed atmosphere of the game play and its technical features, dives users into the dark world full of dangers situations and exciting adventures.

According to the name of this project, here players will have the task to find food in extreme conditions and protect themselvs from criminals' invasion.

Before starting the gaming process, users can choose the character that can be personalized in a while. As usual, the first character players get is the scientist named Wilson that is trapped in this virtual world and has nothing to do, except of solving the problem he faces during the gaming process with. So this application is not only anout fun,- it also helps users to develop their creativity and enhance the capability of strategy building that requires intensive brain's work.

In the pocket edition of Don't Starve players are provided with app's storyline, but it doesn't really affect the gaming process. What is really important to mention, there are lots of different locations that make this game more exciting, as each of them is unique in its own way and has special hidden features.

So among from the advantages of Don't starve: Pocket Edition there are easy-to-use management features that ease the understanding of the game play for both novices in this genre and proficient players. Additionally, this game is a rather beautiful and addictive time-killer, because of the greatly combined project's characterstics. Specifying, developers really paid lots of attention to graphics' quality that detaily show flora, fauna and unexpected situations of the game's world that turn players' imagination on and in this way do not let anyone get bored.

That is why, if you were thinking of trying the application with dynamic game for combine "bussiness with pleasure", "Don't starve" is a good choice for doing it.