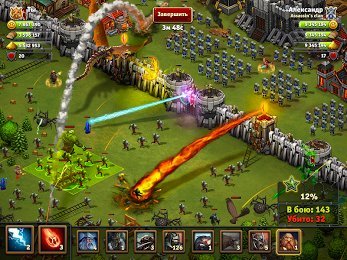 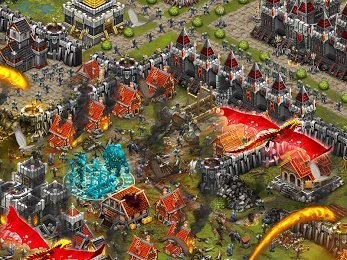 Throne Rush - will be a great test for fans of medieval battles on the screens of mobile devices created on the Android platform. Any Empire is subject to the iron will of the ruler. Connect to the largest fantasy strategy video game in the world, which is filled with the desire to turn you into the Emperor of the free world. Or topple under your feet if you suddenly find yourself an indecisive weakling.

Build inaccessible majestic walls that will be able to keep the numerous raids of ruthless opponents from among the swift elves, treacherous goblins and sinister trolls. While your army will capture neighboring territories. A powerful Alliance with your neighbors, will help you become a real nightmare for not yet defeated opponents. In your free time from the conquest, you can do all sorts of quests, the passage of which in a prudent measure will replenish the Treasury.

In the video game you will find picturesque fantasy worlds, various lands fraught with danger and representatives of fantastic peoples. It is possible to throw forces on development of resources and expanding the influence. Form the national economy of your Commonwealth, choose the path of economic growth and prosperity. The power of the crown will unite the continents, and a warlike Alliance and a powerful clan will establish their control over vast territories.