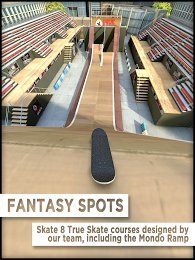 True Skate is a sports simulator game where you are about to show your skateboarding skills. Your fingers will act as the legs of a player in the game. After touching the skateboard with your index finger the next one to do is to place the second finger on a screen in order to push away to disperse. Moreover, you can perform the jumps, turns, and bends with swipes and taps on a screen of your device. It is also should be noted that a skateboard has realistic physics both on the surface and in the air.

There a significant number of skate parks in True Skate are presented starting with the most simple with multiple ramps and ending with the complicated constructions for professionals where you can show all your skateboarding skills. The list of constructions is the following: rails, ladders, stages, ramps, etc. Here you can perform the desired tricks to impress the viewers.

Get on the skateboard, take on the best skate park, and learn new skateboarding tricks and skills to demonstrate your traits at the final stage – the competitions. Take the first place and become a legendary skateboarder.

The game True Skate is providing the user with a few game modes, and ability to choose and customize your skateboard while playing and enjoying the game. Perform more than 100 different tasks to unlock new items, boards, and other useful stuff. Gain more experience points to customize the skills of your character since this would allow you to play better achieving more goals and gaining more points in the future.

The key advantages of the game: