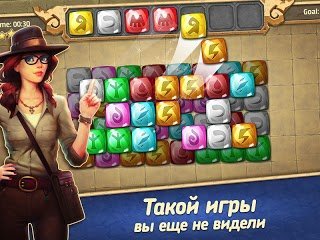 Jones Adventure Mahjong - Quest of Jewels Cave - is an adventure puzzle game from the developers of such a hit as Crystalux, a game that pleased all gamers with its unusual mechanics. Now the developers have decided to use a rather unusual way, combining in one project a huge number of Mahjong and arcade puzzle from a series of three in a row. You, along with Jesse Jones will have to go through a huge number of unrealistically steep tasks, performing a variety of game tasks, and of course — collecting old seals. Great graphic design is in perfect harmony with the main game feed.